A mysterious, ancient illuminated book of healing has already led to one death and the curse of immortality on another, for as medieval alchemist Paracelsus has said: The dose makes the poison. So, what could possibly go wrong when gentleman physician Simon Bell consults gifted apothecary Gaelan Erceldoune in a desperate attempt to treat his dying wife?

A finalist for the 2017 Bram Stoker Award, and winner of the Killer Nashville Readers’ Choice Award, The Apothecary’s Curse is an alchemist’s brew of historical fantasy and medical thriller as a physician and an apothecary race against time to recover the ancient book that made them immortal centuries ago.

I have always been in love with literature’s tortured heroes. So, it is no coincidence that in my first novel I had to conjure one of my own.

Gaelan Erceldoune is brilliant, talented (and yes, quite charming when he wants to be). But, you see, Gaelan is nearly five hundred years old! And although he’s not unhappy to be alive in an age of such incredible innovation, he has not lived an easy life. Imprisoned in Bedlam in 1837, he was tortured at the hands of a mad-doctor, and the scars—internal and external—remain with him even today. He fears discovery most of all, and when he meets the equally brilliant geneticist Dr. Anne Shawe, Gaelan sees a way past his demons.

Part medical drama, part thriller, The Apothecary’s Curse explores the dark side of one of humanity's oldest obsessions--the quest for immortality--and tells a tale of greed, unintended consequences, and ultimately, love.

A romance that transcends time and space, Romantic Times Magazine called The Apothecary’s Curse “a fantastic mix of history and fantasy using a combination of facts, fiction, myth and reality. . .Her scintillating portrayal of Gaelan's tortured soul and Simon's haunting guilt plus the 'OMG' ending truly sets this novel apart.”

The Apothecary’s Curse is available from your favorite online or local bookseller—or at your library. I hope you give it a try, and I’d love to know what you think of it! 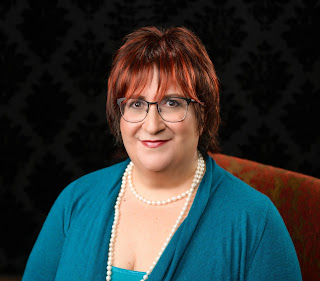 Her book on the TV series House, M.D., Chasing Zebras: THE Unofficial Guide to House, M.D. is a critically-acclaimed and quintessential guide to the themes, characters and episodes of the hit show.
Always a pop-culture and sci-fi geek, Barbara was raised on a steady diet of TV (and TV dinners), but she always found her way to the tragic antiheroes and misunderstood champions, whether on TV, in the movies or in literature. (In other words, Spock, not Kirk; Han Solo, not Luke Skywalker!) It was inevitable that she would have to someday create one of her own.

She is an accomplished speaker, an annual favorite at MENSA’s HalloWEEM convention, where she has spoken to standing room crowds on subjects as diverse as “The Byronic Hero in Pop Culture,” “The Many Faces of Sherlock Holmes,” “The Hidden History of Science Fiction,” and “Our Passion for Disaster (Movies).” Most recently, she gave a lecture at MENSA “The Conan Doyle Conundrum,” which explored the famous author’s life-long belief in fairies.

Barbara is available for signings and other author appearances as well as radio, print and television interviews. She also loves to speak at writers and other conferences! Feel free to contact her directly!
She is represented by Katharine Sands at the Sarah Jane Freymann Literary Agency in New York City. You can reach Katharine at katharinesands@nyc.rr.com.

Between magic and science, medicine and alchemy, history and mythology lies the Apothecary's Curse…
A 2017 finalist for the prestigious Bram Stoker Award and winner of the Reader’s Choice award at this year’s Killer Nashville, The Apothecary’s Curse is a complex tale of love and survival set in a 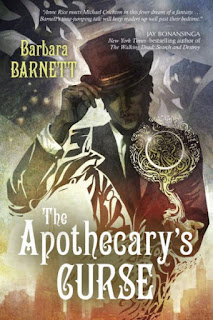 In early Victorian London, the fates of gentleman physician Simon Bell and apothecary Gaelan Erceldoune become irrevocably bound when Simon gives his dying wife an elixir created by Gaelan from an ancient manuscript. Meant to cure her of cancer, instead, it kills her. Now suicidal, Simon swallows the remainder – to no apparent effect. Five years of suicide attempts later, Simon realizes he cannot die. When he hears rumors of a Bedlam inmate—star attraction of a grisly freak show with astounding regenerative powers like his own—Simon is shocked to discover it is Gaelan.

When Machiavellian pharmaceutical company Genomics unearths 19th Century diaries describing the torture of Bedlam inmates, Gaelan and Simon's lives are upended, especially when the company's scientists begin to see a link between Gaelan and one of the unnamed inmates. But Gaelan and Genomics geneticist Anne Shawe find themselves powerfully, almost irresistibly, drawn to each other, and her family connection to his remarkable manuscript leads to a stunning revelation.

Will it bring ruin or redemption?

Meticulous historical detail infuses the narrative with authenticity, providing a rich, complex canvas. And playing off Simon’s connection to Sir Arthur Conan Doyle, The Apothecary’s Curse draws on both the Sherlock Holmes canon and Sir Arthur's spirituality, as well as Celtic mythology, the art of alchemy, and the latest advances in genetics research.