I wrote The Wonk Decelerator (the first book of The Guild Saga) after I imagined a world where some really good people did not always do such great things. The idea of the Thieves Guild (one of two ruling orders in the distant galaxy that evolved from Earth’s Off-World Expansion a couple centuries in the future) came to me as I imagined a band of interstellar pirates—brigands who were intent on becoming legitimate in a society where old and new ways often collide. The Guild values freedom, but not necessarily for you. The Guild is a member’s only club with a view of citizenship and valor much like the Roman Empire. One is either born a Guild citizen or must have purchased it.
This freewheeling futuristic society is in perpetual conflict with a totalitarian, sinister force called the Confederation. The Confederation and the Guild both spawned from the same human ancestors and occupy great expanses of new space, but the former is focused on controlling its population through fear and intimidation, while robbing more and more of its citizens’ liberty. The Guild is the polar opposite, being a society bent on discovery and challenge and adventure, but it is more difficult for the ruling powers to maintain order.
I thought of Guild heroes and what they would be like, and I thought of Guild Commander Thad Cochran—a man who does great things but not always for others. I also thought of Captain Maggie Thorn, a true Guild hero with dark secrets. Though they love one another these two heroes hide it from others and even themselves. Thad has qualities of greatness and a sometimes lack of self-control that gets him into pickles. When one is prone toward pickles, one must also be adept at escaping them—which Thad is! Maggie is capable and formidable. Her only weakness is Thad and her past—things too miserable and painful to think on.
I also, dear reader, considered the great and mighty expanse of our galaxy, the Milky Way and the need for some great discovery that would allow humans to explore its vastness. Wonks are the solution to the problem of traveling such a massive expanse. I have no idea how Wonks work, so don’t ask. We will have to leave it to Thad and Maggie to figure that out—with the help of their blue-skinned Meganite friend, Gravian Endrenicus and another mysterious fellow of uncertain origins by the name of Towe Borrek.
You see, without Wonk travel Earthers cannot go home since they are a lifetime away, and there are forces at work on Earth who do not wish for a return of the explorers. So, it is a most difficult challenge during a challenging time.

John Joseph Doody
About the Author 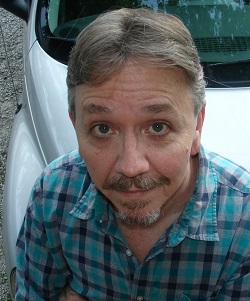 I earned a B.A. in Biblical Studies from Coral Ridge University and Seminary, as well as an M.A. in Political Science from George Wythe College. My first publication was a short story, TELEPIO 690, which appeared in Sidetrekked Magazine, Issue #48. My other publications are, my first novel (actually a novella), THE WONK DECELERATOR, my second novel, THE LATE, GREAT BENJAMIN BALE, my third novel, RETURN OF THE CRIMSON WITCH and a fourth mini-book, a prequel to the Guild Series, THE DAUGHTER OF GETH, which is available only in ebook. I am currently working on a science fiction/horror novel, THE DARK. One of these days I might even finish it.
Happily, I have a wife and four children and live in Florida.
Website Link: www.johndoody.com
Twitter Link: @johnjosephdoody
Facebook Link: https://www.facebook.com/authorjohnjosephdoody/ 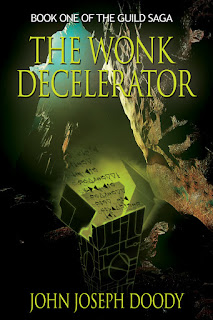 Title: THE GUILD SAGA: THE WONK DECELERATOR (Book 1)
Author: John Joseph Doody
Publisher: eTreasures Publishing LLC
Pages: 131
Genre: Science Fiction/Fantasy
BOOK BLURB:
For Earthers dwelling in Guild space, it is a one-hundred year journey back to Earth. An unimaginable voyage, until now.
When Guild commander and crack pilot, Thad Cochran boards the shuttle destined for the casinos of Timmerus, finding a way back to Earth is not on his radar. He wants the five-percent finder’s fee the Guild is offering for a black box held by the lizard-like Yazz. Thad has a dream: With the loot he will get for stealing the Wonk Decelerator, he can buy a ranch on Beta Prime.
But things begin to fall apart for him in the dark caverns of Timmerus, and Thad must reconsider his priorities in life. Has he discovered a cause greater than his dream? Are there actually more important things to life than money and his dream? What about the woman who is waiting for him? What about freedom in the galaxy? And what about his discovery, fashioned by the gnarled hands of a brilliant, old Yazz, that could change everything?
Thad Cochran has a choice to make. He can fulfill his quest, escape with his life and be rich. Or he can fly with the Wonks … one more time.

Thad opened his eyes, aware of a sense that the murky sun was dropping on the horizon. He panicked momentarily until he realized he still had a half hour before the prearranged confab with Maggie.

He headed for the bathroom to change into darker clothes for the journey. The bathroom had Thandimonean stone flooring, golden faucets and a huge commode one nearly needed a ladder to get up on.

Thad rubbed his face and ran his tongue over his teeth. He might as well clean up while he was in here. He stripped, broke out his toothbrush and was busy about his business when he heard a creaking hinge.

He stepped out of the bathroom in his skivvies, toothpaste frothing in his mouth.

He heard the voice, glanced at the open door, but saw no one.

"Yeph?!" he gurgled, toothpaste spraying everywhere as his voice took on a falsetto tone.

Thad looked up, and his heart tried to jump out of his gullet. The woman, the one he had seen in the space port

and had suspected of being a droid, crawled across the ceiling like a spider chasing after a bug. How she managed to cling, upside down, her head twisted a hundred and eighty degrees and looking directly at him, was a repulsive mystery to him.

Oh, you’re a droid all right!

He had never seen a Mandroid capable of walking on ceilings. This droid’s techno was impressive and scary.

"You should go back to your people, Commander Cochran," she said, as she crawled down the wall, her head twisting again, cracking and popping back to its original position.

He knew there was no sense in trying to get away, or in trying to fight with this droid. She was too fast, too strong. He had no weapon to use against her, and worst of all, he was in his underwear.

Once on the floor, she meandered over to him and, with a critical expression, eyed him from head to toe. She was beautiful, but she smelled of a peculiar blend of perfume and something like burnt rubber.

"There’s only death waiting for you here on Gar Mega. Go back, Commander, before it’s too late."

With that, she walked stiffly from the room, leaving the door open. Thad wasted no time, sprinted to the door, locked it and leaned against the wall, his legs trembling beneath him.

She’s probably got a key that pops out of her finger or something. I know I locked that. 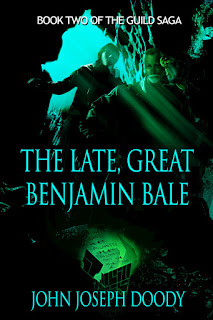 Title: THE GUILD SAGA: THE LATE, GREAT BENJAMIN BALE (Book 2)
Author: John Joseph Doody
Publisher: eTreasures Publishing LLC
Pages: 370
Genre: Science Fiction/Fantasy
BOOK BLURB:
The destinies of two men depend on Maggie Thorn. One is dying and the other is dead…or is he?

Captain Maggie Thorn is on a formal Guild mission, supposedly to kidnap the yazz scientist, Gravian Endrenicus, and return him to Thandimone. But she also has a personal score to settle with the lizard-like inhabitants of Timmerus. She intends to make the yazz pay for what they did to Thad Cochran—the one the yazz call the Thieves Guild pilot. The man she loves.

Supreme Fleet Commander, Admiral Geoff Grangore knows of only one man who could get Maggie to Timmerus and back while traitorous eyes are watching. That man is an old drunk who lives deep in the Thandimonean wilderness with his pet Eno, Snot. Benjamin Bale is suicidal and cantankerous, and Maggie can’t stand him—at first.

Bale is a dead man. At least, that’s what everyone was told. But this dead man has a final mission to perform. The greatest star pilot in the galaxy has a chance to redeem himself and make right a great wrong. A wrong which he can never forgive or forget. A wrong that cost him everything. 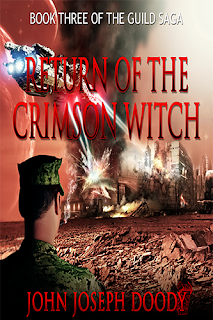 Title: THE GUILD SAGA: RETURN OF THE CRIMSON WITCH (Book 3)
Author: John Joseph Doody
Publisher: eTreasures Publishing LLC
Pages: 407
Genre: Science Fiction/Fantasy
BOOK BLURB:
The Bashtier call Wonk space, Eerindark—The Place of the Dead—and Thad Cochran, the only pilot to go there and live, will soon find out why. The sacrifice of Benjamin Bale brings Thad back from the dead. But is he truly free from the death grip of the Wonks?
A body is discovered behind an apartment wall in a small town on the planet Daggon. With the mystery thrust upon him, Admiral Geoff Grangore must pursue a dangerous quest for the truth—is it somehow connected to The Wonk Decelerator?

Dreams and visions are dancing in the heads of the yazz. Something bad is coming to the frontier—a hidden enemy only the Guild traitor, Alexander Hamilton Patho knows.
Patho sends an assassin to Daggon and his conniving gaze is on the M-3 Wonk vessel. It seems civil war is imminent and those who control the power of Wonk travel will rule the known galaxy. Therefore, it must not fall into Patho’s hands.

It is time for war, and time for Maggie Thorn to learn the truth about who she really is. It is also time for The Return of the Crimson Witch.