I've always loved the game of baseball. Not everyone does, and I understand you may be one of those folks. Yes, the game of professional baseball is central to the plot of Mortal Foe. Don't worry. I've been very careful to make sure Foe doesn't go so far into the statistics and intricacies of the game that anyone gets lost. I've never been one of those guys who lives for and by the numbers. The stories, the legends and the myths always fascinated me more.

Granted, greatness is found by comparing one player's numbers to the numbers of other players. Lou Gehrig's string of playing in 2,130 consecutive games, for example. Think about that. He played in every game, through every ding, dent and illness, for 17 seasons. Which one of us has never called in sick? Amyotrophic lateral sclerosis ended the string, and his life. Cal Ripkin, Jr. broke Gehrig's record, but not until 56 years later. What a great story!

And there's the example set by the larger-than-life Babe Ruth. Ruth partied like there was no game tomorrow, even though there usually was. He struck out 1,330 times. But he also hit 714 home runs, a record that stood for nearly 40 years. Here was a guy with major flaws, sticking to it and getting the job done despite all the times he failed.

Ruth was also central to a myth that edges more into Mortal Foe's paranormal territory. The Babe started his major league career in 1914 with the Boston Red Sox as a pitcher, and a very good one. By 1918 he had helped the Sox win two World Series. But in the winter of 1919, the Red Sox sold his contract to the New York Yankees, where Ruth would become a legend. The Red Sox didn't win another Series for 86 years. The drought became known as the Curse of the Bambino, after one of Ruth's nicknames. They would come close on occasion, but always lose in some bizarre or ironic way.

Let's debunk the curse, though. Ruth still played the 1919 season in Boston. They ended up in 6th place, and the contract sale only happened afterwards. Still, it makes another great story.
While I'm on fun and inexplicable baseball lore, few are more fun than the Chicago Cubs' Goat Curse. In 1945, the Chicago Cubs played against the Detroit Tigers. Game 4 was played at Chicago's Wrigley Field. A tavern owner named William Cianis brought his pet goat, Murphy, to the game. The smell of the goat bothered other fans, and Cianis and Murphy were escorted out of the stadium. Cianis reportedly cursed the Cubs, saying, "They ain't gonna win no more." The Cubs lost that game and the Series, and didn't win another Series for 71 years.

Then again, the last time they won a Series before 1945 was in 1908. No one claimed a curse for the previous 36 seasons.

I love stuff like this, but it made me wonder why no one has claimed a curse in Cleveland. The Indians' last won a World Series in 1948. They've lost several Series since. Why no curse there?

I guess I'm getting a little carried away. Frankly, if Foe gives you a reason to peek in your closet before bed, or to look over your shoulder on a dark street—or if it gives you a little food for thought—then I feel I've done my job.

And who knows? You might become a baseball fan.

Thanks for reading Mortal Foe. 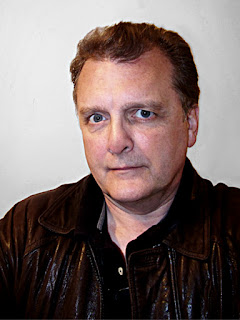 Marty Roppelt was born and raised in Cleveland, Ohio. His original profession was acting on stage, in local commercials and training films and in film. This means that he has experienced life through a wide variety of day and night jobs, from barista to waiter and bartender to security guard, amongst many others. He lives in Illinois with his wife, Becky, and their eccentric cat, Fritz. Mortal Foe is his debut novel. 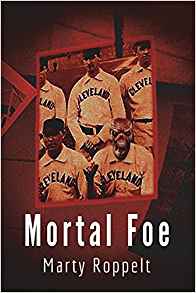 Title: MORTAL FOE
Author: Marty Roppelt
Publisher: Dragon Breath Press
Pages: 213
Genre: Supernatural Thriller
BOOK BLURB:
A picture is worth a thousand words… But what if that image can only be seen through the lens of one camera? What is the snapshot can only be seen by a select few? What if the photo has its origins in the pit of Hell? What is that face belongs to an enemy bent on destruction? This is Buddy Cullen's fate when he first dreams of his grandfather's death and then inherits his grandfather's antique camera and captures an image that haunts him and seeks his death. Can Buddy survive the curse that he sarcastically dubs "Popcorn"—a curse that no one wants to believe exists and stalks the city of Cleveland, beginning with its baseball team—a mortal foe?