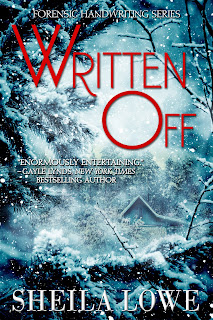 When I started writing my first mystery, I could not have guessed that murder would soon become all too real in my own life.

As a forensic handwriting examiner with thousands of cases over more than thirty-five years of practice, I had collected some interesting tales. And, as someone who wanted to write a mystery since reading Enid Blyton’s The Sea of Adventure, which I received on my eighth birthday, finally, in 1997, I sat down to do it. It started with a title, Poison Pen, and bits of a story about a colleague who died, an apparent suicide, at 37. I wrote a few chapters, realized that I didn’t know what I was doing, got discouraged and put the manuscript aside.

Fast forward to the morning of February 19, 2000 and the phone call that changed everything. It came from a detective with the Orange County (California) Sheriff’s office. After introducing himself, he said, “I’m sorry to tell you, your daughter has been murdered.” Yep, just like that.

After staring at the phone for a long moment before handing it to my then-husband, I learned that Jennifer was the victim in a murder-suicide by Tom Schnaible, the man who was living with her. Tom was a federal agent who worked for the INS—what is now known as the Department of Homeland Security. He shot her eight times as she ran from him, then put the gun in his own mouth and pulled the trigger. Jen had planned to leave him the next day.

Nine or ten months earlier when they first met, Tom gave me a sample of his handwriting to analyze. The red flags I saw in it made me shudder. The three of us talked about the problems they might face in a relationship, including his need for absolute control and Jen’s absolute refusal to be controlled. She was 27 and as her mother, I had always found it a challenge to get her to do…well, anything I wanted her to. And as usual, she did not listen to the warning.

There are no words to describe the experience of burying one’s child. Seeing her lying in a casket—her, but not her—watching that wooden box lowered into the ground; going home after the funeral knowing there would be no more phone calls, no lunches out, no family dinners with my only daughter. Trying to help my two sons understand that there was nothing they could have done to save their older sister, for whom they grieved deeply. Catching myself in a store in the following months, seeing a cookbook she would have liked, thinking, “I should buy this for Jen…Oh.” 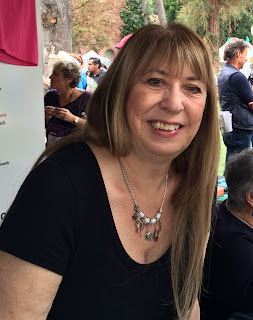 As the weeks went by and it became necessary to get back to “real life,” I picked up the Poison Pen manuscript again. A good distraction. I started working on it with a friend I had known only as a psychic—he’d given me loads of readings. But I discovered that he had published a dozen mysteries with Random House in the early ‘80s, and he was willing to teach me the basics of mystery writing. So, every couple of weeks I drove the sixty miles to his home and spent a couple of hours reading aloud my latest pages. He was enthusiastic when my writing worked and when it was crap, he pulled no punches. So, Poison Pen eventually got finished, won third place in a competition by the Southwest Writers organization…and took another seven years to get published. But that’s another story.

Suffice it to say, Dear Reader, seventeen years later I continue to work at honing my craft, and now, the seventh book in my Forensic Handwriting Mysteries, Written Off, is ready for its November 14, 2017 release. It’s about a female serial killer in prison in Maine, and the murdered professor who was writing a book about her. While searching for the manuscript in the professor’s two-hundred-year-old mansion, handwriting expert Claudia Rose uncovers explosive research about some trouble university students who are dubbed “Maynard’s Maniacs” by their classmates. The professor’s academic success and personal fortune made her the envy of fellow faculty members, and the University anticipates being the beneficiary of her estate. But a charming stranger shows up brandishing a new will, and all bets are off. After answering the local police chief’s call to examine the will, Claudia rushes back to the professor’s isolated mansion and becomes trapped in a blizzard. With a killer.
I hope you will give Written Off a try.

Find out more on Amazon
Dear Reader at 6:46 AM