Thank you for taking an interest in The Specter of the Indian: Race, Gender, and Ghosts in American Séances, 1848-1890. I didn’t write this book so I could get professorial tenure, certainly not to take the easy way out of my graduate program by travelling a well-trodden path, or even to make money. I wrote it because I care deeply about the material, and felt compelled to explain something America has a broad interest without fully understanding it.

Scores of Americans read their palms, tarot cards, or 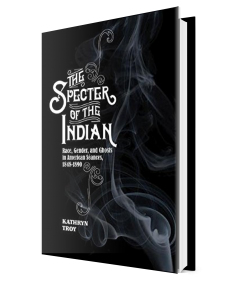 horoscopes on a daily basis. Countless people have owned a Ouija board at one point in their lives. Hours upon hours of television programming are dedicated to readings by renowned mediums like John Edward and Theresa Caputo, investigations of haunted historic restaurants and graveyards, and the recording of personal experiences with the dearly departed. America has a long history with the supernatural, as old as its relationship with American Indians.

When I began researching the origins of American Indians ghosts—specifically, American Indian spirit guides—in America’s cultural consciousness, I was met with some very neat answers. “Hollywood!” Sorry, no. Nineteenth-century Spiritualists themselves wrote about how, in laymen’s terms, everybody and their mother had an Indian spirit guide, way before Hollywood’s time. True, they helped perpetuate the myth that Native Americans are spiritual creatures, but they didn’t create it.

“The New Wave!” Yes and no. New Wave spirituality, which became popular in the 1960s, certainly progressed the stereotype that Indians, by their very nature, are more spiritual than your average, run-of-the-mill Americans. Many of their ideas were borrowed from nineteenth-century movements: Spiritualism, Theosophy, New Thought, Christian Science, etc. The mythic connections between Indians and the spirit world are no exception.

“All the tribal peoples of the world are full of spirit power.” Seriously, someone said that to me during an interview. Wrong again. On a lot of levels. One of which is the fact that, in America and around the western world, accounts of Indian spirit guides occur with higher frequencies than any other nonwhite entity. But let’s put aside this oversimplified, generalized, Orientalist, racially demeaning statement for just a second, and understand something important about what this medium said to me. That nonwhites are somehow more spiritual than whites is a powerful, pervasive concept. A concept: a way of thinking about the world, the people in it, and how they relate to each other and to the universe at large. Her concept of Indian spirituality is wide-spread—that is undisputable. But where did the idea start? Why? Those are some of the questions I seek to answer in The Specter of the Indian. And the answer is really complicated. A multitude of different cultural, political, religious, racial, intellectual, and scientific factors created the environment that fostered the idea that “Indianness” is defined by spirituality, and that Indian spirituality is a powerful force that can be channeled towards helping non-Indians understand the universe.

I’ve presented readers of this book with a ton of detailed examples of just how this stereotype was created, what purpose it served, and how it has achieved an astounding level of success, becoming an unquestioned staple in America’s cultural imagination. Seeing just how complex these processes of cultural production are might, perhaps, help readers appreciate the complexity of our society, its racial makeup, and our unending fascination with the supernatural. If what I’ve discovered can feed that interest, so much the better. Happy reading. 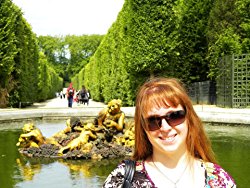 Kathryn Troy has two Master’s Degrees in History from Stony Brook University. She contributed to the anthology The Spiritualist Movement published by Prager in August 2013, and teaches at Farmingdale State College and Suffolk County Community College. In her spare time she pours all she knows about the ghostly and supernatural into her fiction writing.

Her latest book is The Specter of the Indian.